A few months before plunging into my work for this blog, I developed a healthy obsession with yoga-related information. I had submitted my application to start my 200-Hour Yoga Teacher Training (which began in September) and was thirsty for any book, blog, podcast, or journal that would broaden my understanding of yoga, anatomy, biomechanics, mindfulness, and more. I quickly noticed a pattern in the reliability of the yoga-related sources: with the exception of a few complete quacks on one end and some stellar works at the other, the information coming out of yoga-related blogs, books, podcasts, and journals is often: opinion-based; void of research; passed down from a Guru; possibly biased and/or sometimes created with conflicts of interest (see Figure 1*). 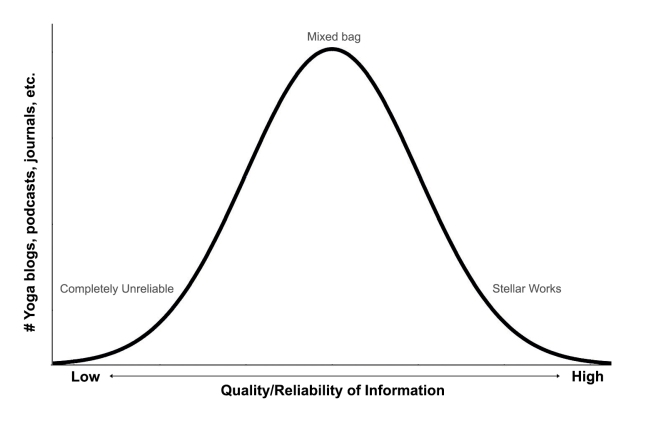 *Note: This is merely observational on behalf of the author and is in no way scientific.

In other words, most yoga podcasts or blogs are a mixed bag of some great information and ideas, lots of opinions, and some information that is poorly researched (if at all) and/or cited. With the exception of conflicts of interest, there is nothing wrong with opinions, hands-on experience, and advice from a Guru — if it helps don’t fix it! That being said, I think the audience should be able to decipher between opinions or a Guru’s advice and an evidence-based method. One podcast I listen to, for example, has interviews with both academic researchers as well as quacks with conflicts of interest (that are, of course, never declared). I don’t want to name names because my intention is merely to reveal an opinion of my own: it is difficult to navigate through the information mediums of the yoga-world with confidence that the source is reliable and the information is accurate.

Without searching the scientific literature (which is financially, practically, and academically inaccessible to the majority of the population), it is difficult to gain access to reliable sources and accurate information. Further, I believe the scientific literature would provide tremendously helpful input to the field of yoga. It’s a position that is too often ignored in the yoga world and I have created Kerry McInnes Yoga with the intention of adding a new voice to the dialogue.

It is no surprise that the field of yoga is lacking in voices that take an evidence-based approach. B.K.S Iyengar, yoga’s darling guru, infamously peppers his books with medical terminology wildly claiming that his asanas, or poses, have the ability to “cure” anything and everything from sterility to polio! Without including a single citation, there is no mention of randomized controlled trials or even a lonely case study. Gurus aside, the growing popularity in the Western world and precious research dollars being allocated its way, yoga is finally beginning to be empirically studied. To date, however, the yoga research is still sorely lacking: for the most part, studies are small, randomized controlled trials are biased1, and who wants to fund yoga research anyway? That said, movement-related research (e.g., kinesiology, sports medicine, biomechanics, rehabilitation science) is not a meagre area of study. By broadening the scope of research to include related fields of study, we can improve the quality of information emerging from the yoga community. Further, I believe an evidence-informed approach to yoga can diminish the shadow looming over the yoga community.

Not all fields have this shadow looming over their reputation. Ironically enough, Dr. Loren Fishman was introduced to yoga through B.K.S. Iyengar. He is now an Assistant Professor at the Columbia Medical School and has written extensively on the topic of yoga and rehabilitation. He was interviewed for William J. Broad’s recent book The Science of Yoga2 where he remarks:

Yoga is in danger […] It can tip either way — toward science or religion, towards people who are seeking to know the truth or toward people who like hierarchies.’ Most yoga therapists get their information from a guru […] But science now has the means to determine what really works in yoga therapy and why […] Its methods can reduce false diagnoses and risky treatments. Its respect for the facts […] can help turn the fledging discipline into a real profession.

To be clear, I don’t believe science has all the answers, as the previous statement might condone. Science is only as powerful as its lowest common methodological denominator — and there are some serious methodological limitations to the scientific method! I just don’t believe that advice from the Guru is the only solution. I think we need to inform our practices with the best evidence we have while recognizing the limitations and continue to search for better answers.

On a personal note, I just passed my four-year anniversary with a chronic health condition to which I have received little help from the conventional healthcare system. My husband is in medical school and he is not offended by this statement. In fact, he also holds the opinions that our healthcare system is relatively inept at addressing chronic health conditions. And if you haven’t already put the pieces together, I have left the field of research and academia to pursue a career in a form of complementary and alternative medicine — yoga!

In light of the aforementioned limitations concerning both access to and reliability of information relating to yoga, I have created Kerry McInnes Yoga: An Evidence-Informed Approach to Movement. KMY will look at a variety of topics related to yoga with an emphasis on the mind-body connection. Topics will include, but will not be limited to: anatomy, neuroscience, psychology, rehabilitation, and more! When I am writing about my opinions, it will be clear that they are indeed my opinions.

Seeing as this is my introductory blog post, I think it is the best place to make a disclaimer: I am going to make mistakes. All future posts will be the result of my best effort to deliver an evidence-based approach to a given topic. Readers should bear in mind, however, that scientific literature almost never has a clear interpretation and there are always conflicting findings. Further, my posts will aim to stay around the thousand-word mark and thus there will be limitations to what I can communicate. Finally, I have no funding and I am only one interpreter of the literature.

If you head on over to the About page, you can read a little bit about my background. Before I conclude, I need to share a declaration of interest, perhaps. While I stated earlier that this blog was created with the intention of writing an evidence-informed platform that is accessible, this is merely the secondary intention of my blog. My primary intention is completely egocentric and pedagogical in nature. That is, my primary interest in writing and researching for KMY is to learn and engage with the literature and information I find. In doing so, I hope to become as informed as I can with the information and time that I have. In turn, I believe this journey will help me better serve my (future) students as a yoga teacher and myself as a yogi!

Kerry is a Canadian yoga teacher and student of Physiotherapy. She completed her Master’s of Science in physiotherapy research (rehabilitation research) at Dalhousie University in 2016 and learned to value an evidence-based approach to understanding human movement. She loves to read about the mind and body and translate what she learns into writing. Kerry strongly believes in the inseparability of mind and body, otherwise known as the mindbody connection. To her, a movement practice is a beautiful place to explore this fascinating connection. Kerry also sees movement as a powerful tool for injury prevention, rehabilitation, and overall wellness. When Kerry is not learning about the body or teaching yoga, she spends her time cooking, knitting socks, and walking everywhere in barefoot shoes with her husband and two greyhounds. Kerry lives in beautiful Halifax, Nova Scotia on Canada’s east coast. View all posts by KerryMcInnesYoga

5 thoughts on “Why Evidence-Informed Yoga Blogging?”

My Book – Modern Yoga: Everything you Want to Know About the Pelvic Floor

Modern Yoga: Everything You Want to Know About the Pelvic Floor

Learn to move with more skill and less pain